This assignment wasn’t as easy as I thought that it would be. I tried to find maps that were different and communicated some sort of message. 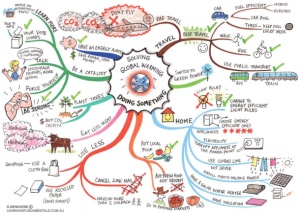 The first map is a mind map for solving global warming. The map uses images and text to guide the reader through the map. It starts in the middle and has options that sprouts to the other pathways. At the end of each pathway , there’s an accompanying visual.

This is a map of a fundraiser from the Habitat for Humanity that depicted the number of homes being built from 2010 and predicting to 2014. This map uses mostly images and has some text to denote some of the attributes that will guide the reader. This map starts from off the left side of the page and ends on the right side. For this particular map, I think that it would be just as successful without so much text.

This map is a lot different from the other two maps that I’ve just displayed. This map does the opposite with mostly text and some images. This is a map for an algorithm coder. Having text instead of images is a better choice for communicating its message in this case because this map is more technical.

One thought on “Maps that Visually Communicate”